IT EN
Let's make free Massari park
Perhaps in the foggy evenings of the ferrarese autumn the closing of cancels of Parco Massari affords to the ghost of the little Maria Pristina Massari, only daughter of the Duke Francesco, to still play freely among the solitary and silent colossal trees and the small paths. Or perhaps the boundary wall that encircles the green area is a kind of common patrimony for the memory of those who at least once have taken refuge in order to make skip school, for being able to hide from eventual inopportune encounters with parents and professors.
The reality is that today Parco Massari, the biggest of the parks within city walls, is a physically and ideally hidden space, still not completely “accessible” after more than 70-year-old passed from the purchase by the municipality in order to assign it to the public fruition. The same history of the park tells a “closing will” from the very beginning: the land, of approximately four hectares and contiguous to the pieces of real estate property of Conti Bevilacqua, initially was used to grow vegetables, and only successively transformed in garden in 1780 for will of Marquis Camillo Bevilacqua Cantelli, that entrusted the plan to the ferrarese architect and painter Luigi Bertelli. The perspective reproductions of the age point out this great green space and its tree-lined avenues flanked from mythological statues, mazes, springs, temples, flower-beds, greenhouses in order to maintain plants, exotic fruits…
… and a boundary wall. Decorated with small columns, urns and vases, it opened into seven entrances - of which one is still visible today in Corso Ercole I d’Este, angling with Via Guarini. The wall remained a founding element also when, during the half of XIX the century, all the complex was acquired by the Count Francesco Massari, than besides planting the famous Cedars of Lebanon that all the ferraresi know for the branches which stretch out on Corso Porta Mare, reorganized the garden to English style, maintaining Parco Massari as a mythical and inaccessible place to the citizens until the already cited acquisition from the municipality in 1936.
The question that we want to ask the ferraresi citizens is this: does the boundary wall still have a reason to exist? As an historical derivation of the private nature of Parco Massari, we consider that today it has lost its “protective” functional nature, and constitutes an obstacle for the sight and the free fruition of the park. To rethink the park as the beating heart of the city center, to free the cedars, the rates, the oaks, the ginko, the nettle trees, the platans and the paulonie; the peaks, the great tits and the robins; the springs and the tree-lined avenues; the park benches and the games for children. A park that does not close something inside, but that it is opened, breaths, becomes easier to cross, to see and to live by the citizens. A new lighting system, a more functional usage of the spaces, in order to transform Parco Massari in a true free and permeable city oasis, final passage of the restitution of the area to the citizens and symbol of Ferrara as a green and sustainable city.
La Nuova Ferrara newspaper 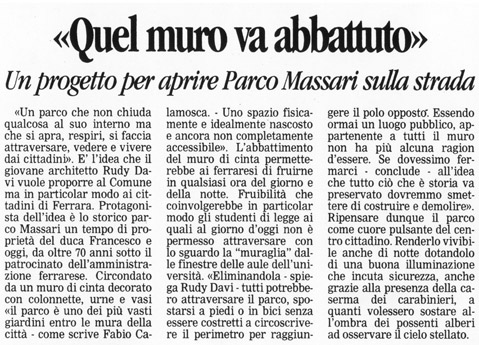 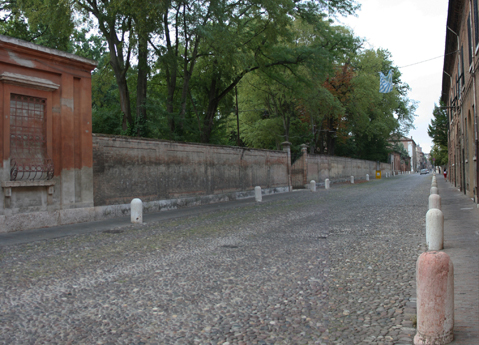 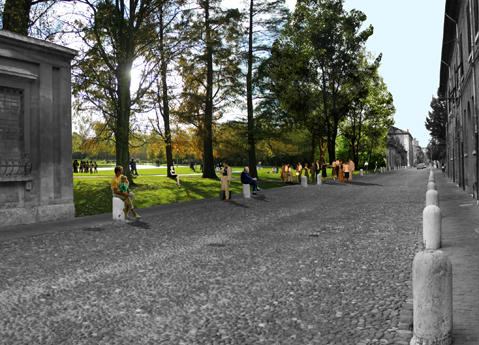